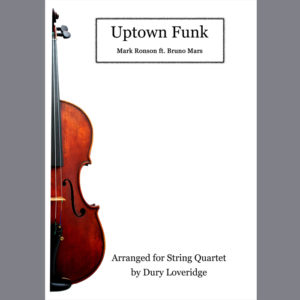 Released late in 2014, Uptown Funk spent 14 consecutive weeks at Number One in the US, becoming one of the biggest selling hits of 2015. A collaboration between Mark Ronson and Bruno Mars, if featured on Ronson’s fourth studio album, ‘Uptown Special’, and won two Grammy Awards including ‘Record of the Year’. It’s even been said to be the fifth most-viewed YouTube video of all time.

This arrangement for string quartet remains faithful to the original song, with plenty for the players to do. Perfect for weddings (or even as a concert encore), it always gets feet tapping in the audience.

This arrangement is only available to buy through SheetMusicPlus.com and costs around £9.90 for the full score and parts, delivered instantly from the site as a pdf.

Click through to look inside the score, hear an audio sample, and to buy.